“Teaching music is not my main purpose. I want to make good citizens.
If children hear fine music from the day of their birth and learn to play it,
they develop sensitivity, discipline and endurance.
They get a beautiful heart.” -Dr. Suzuki 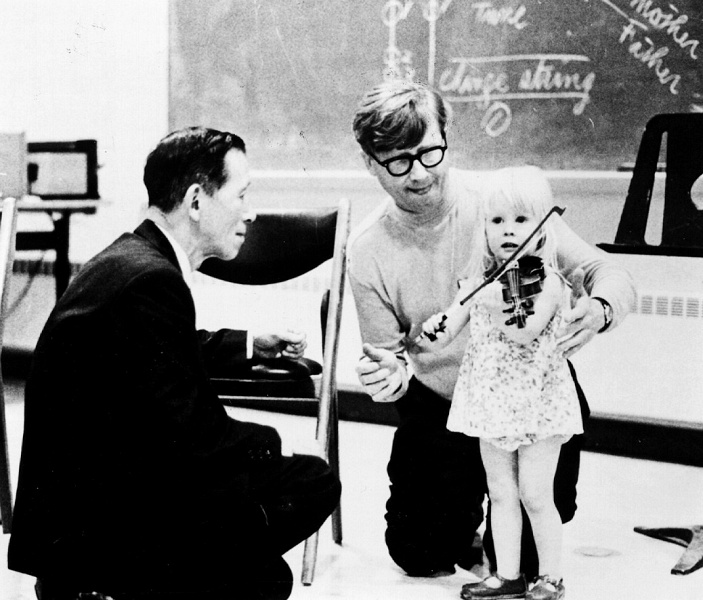 About the Suzuki Method

Every Child Can Learn

More than fifty years ago, Japanese violinist Shinichi Suzuki realized the implications of the fact that children the world over learn to speak their native language with ease. He began to apply the basic principles of language acquisition to the learning of music, and called his method the mother-tongue approach. The ideas of parent responsibility, loving encouragement, constant repetition, etc., are some of the special features of the Suzuki approach.

As when a child learns to talk, parents are involved in the musical learning of their child. They attend lessons with the child and serve as “home teachers” during the week. One parent often learns to play before the child, so that s/he understands what the child is expected to do. Parents work with the teacher to create an enjoyable learning environment.

The early years are crucial for developing mental processes and muscle coordination. Listening to music should begin at birth;
formal training may begin at age three or four, but it is never too late to begin.

Children learn words after hearing them spoken hundreds of times by others. Listening to music every day is important, especially listening to pieces in the Suzuki repertoire so the child knows them immediately.

Constant repetition is essential in learning to play an instrument. Children do not learn a word or piece of music and then discard it. They add it to their vocabulary or repertoire, gradually using it in new and more sophisticated ways.

As with language, the child’s effort to learn an instrument should be met with sincere praise and encouragement. Each child learns at his/her own rate, building on small steps so that each one can be mastered. Children are also encouraged to support each other’s efforts, fostering an attitude of generosity and cooperation.

Learning with Other Children

In addition to private lessons, children participate in regular group lessons and performance at which they learn
from an are motivated by each other.

Children do not practice exercises to learn to talk, but use language for its natural purpose of communication and self-expression. Pieces in the Suzuki repertoire are designed to present technical problems to be learned in the context of the music rather than through dry technical exercises.

Children learn to read after their ability to talk has been well established. in the same way, children should develop basic technical competence on their instruments before being taught to read music.

Are Suzuki students musical geniuses? Are they ‘gifted’ children who have a special talent for music? Are their parents professional musicians? Fortunately, Suzuki students are normal children whose parents may have little or no musical experience. Their parents have simply chosen to introduce them to music through the Suzuki approach, a unique philosophy of music education developed by Shinichi Suzuki.

Shinichi Suzuki was a violinist, educator, philosopher and humanitarian. Born in 1898, he studied violin in Japan for some years before going to Germany in the 1920s for further study. After the end of World War II, Dr. Suzuki devoted his life to the development of the method he calls Talent Education.

Suzuki based his approach on the belief that “Musical ability is not an inborn talent but an ability which can be developed.
Any child who is properly trained can develop musical ability, just as all children develop the ability to speak their mother tongue. The potential of every child is unlimited.”

Dr. Suzuki’s goal was not simply to develop professional musicians, but to nurture loving human beings and help develop each child’s character through the study of music.

Parents whose children are involved in Suzuki program throughout the country are enthusiastic about the benefits for their children and their whole families.

In Cleveland, Ohio, Jan McNair participates in Suzuki violin study with her four-year-old son Ben. She points out that Ben is discovering “the joy of doing something because you’ve worked to do it. What he’s doing right now will be second nature to him. This is the way to learn.”

In addition to instilling a love of music, the Suzuki approach puts emphasis on the development of the child’s character. Ben begins and ends every lesson by bowing to his teacher and thanking her. His teacher, in turn, thanks him: “I learn something every time I teach you,” she tells him.

Perhaps it is music that will save the world.
—Pablo Casals

Charlotte Johnson of Papillon, Nebraska, participates in a Suzuki program with her ten-year-old son Christopher. “They learn really good music right away, and they develop good memories,” she says. “Developing self-esteem is another plus,” she adds. “He can get up in front of people and it’s no big deal.”

“This is not just music education. The long-term effects on the family are positive and far-reaching,” says Pam Brasch,
Executive Director of the SAA. “It teaches a child cooperation, self-esteem…so many important qualities that children are not getting otherwise.”

How does Talent Education differ from other methods of teaching music to children?

Thoughtful teachers have often used some of the elements listed here, but Suzuki has formulated them in a cohesive approach.
Some basic differences are: