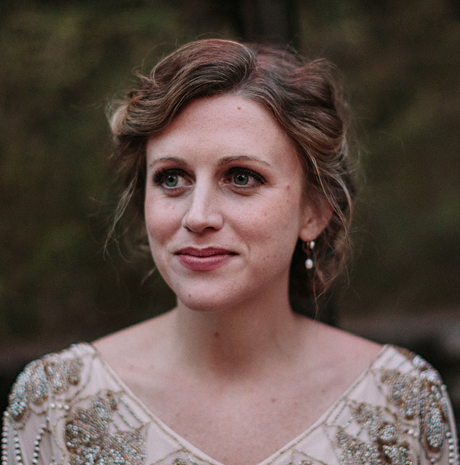 Q: How did it all begin for you–the music, that is?

I don’t really remember…I have to rely on my mother’s description of that fateful day as a 10 year old. Apparently I came home from school one afternoon and randomly told her I wanted to play the violin. My parents (being the amazing, supportive parents they are) asked no further questions, bought me a violin, and set me up with lessons. I played mostly classical music for about 7 years and then branched out to celtic, jazz, and bluegrass. My older brother got me into U2 when I was about 13, and then I started listening to Led Zeppelin, Oasis, and the Allman Brothers. I’d turn on my tape player and play along. That’s what got me more interested in improvising and composing.

Q: From Matthew Mayfield to the Triceratops, you’ve played with many people. Who all have you played with?

Great Book of John — recording with Jeffrey Cain of Remy Zero and Grammy Award-winning engineer Darrell Thorp (Radiohead, Beck, Outkast) has been one of my favorite recording experiences. It was such a privilege to work with them…they are top notch. They pretty much let me loose and were so encouraging in letting me try anything I wanted.

Matthew Mayfield — recording with Nashville producer Paul Moak (Mat Kearney, Lovedrug, Griffin House). I love playing live shows with MM. He also just happens to be one of my dear friends…the most loyal you could ask for.

Stewart Vann/Triceratops — I was a member of Triceratops, which was a large collaborative family. Recording with engineer & producer Lynn Bridges (Devendra Banhart) was especially interesting. Such fond memories…there were 9 band members at the time…

Monarchs — Celeste and I are a dynamic duo when it comes to writing parts…love that girl and the way she dances. We recorded at an artist commune with a 4 track tape recorder and Taylor Hollingsworth (a member of Conor Oberst and the Mystic Valley Band) at the helm. Why would you record in a studio when you can record in an old abandoned women’s community shower? (aka Sexy Elephant Studio) Heyo!

Armand Margjeka — Pipe & Gun is one of the newer studios in Birmingham, AL. Armand is incredibly enthusiastic about playing and recording and is always open to experimenting musically. Born and raised in Albania, there is a cultural “flare” about Armand’s music that just takes you away…

Q: What inspires you most?

Troublemakers: the most influential avant-garde music always seems to be born during a political/societal rebellion or counter-culture movement (i.e. punk movement in the 1970s)

Anything and everything about foreign cultures: what different people groups eat, how they dress, traditions, relational interaction, their music…all very inspirational and fascinating to me. Even just the sound of a foreign language can be so musical. I live to travel and experience the highly addictive act of total cultural submersion.

Stewart Vann—the most creative singer/songwriter/musician/best friend I’ve ever known—unpretentious, unpredictable, prophetic, prolific. I’ve never met anyone like him. He literally feels his music.

Sigur Ros’s string quartet, Amina, has always struck me as powerful and innovative.

Owen Pallett, who wrote all the string arrangements for Arcade Fire, has influenced my playing especially with his unorthodox countermelodies on Funeral.

Jonny Greenwood is my musical hero…many do not realize he is a classically trained violist. The buildup he creates through melodic tension with the strings on many of Radiohead’s albums is so tasteful.

This may seem random, but the strings on Late Registration by Kanye West are incredible. Jon Brion (who also wrote the soundtrack for Eternal Sunshine of the Spotless Mind, Punch Drunk Love, and I Heart Huckabees) co-produced and wrote all the string arrangements for Kanye. He’s brilliant and virtuously experimental. People that can bridge the gap between hip-hop and classical music are downright brilliant.

When I’m in a music funk and need to be inspired, I revert to Radiohead, Brazilian artists of the Tropicalia movement, The Fugees, Jeff Buckley, Florence and the Machine, Sigur Ros, and always, always U2.

Most inspirational time: the minutes right before I fall asleep, when an idea strikes me, and I have to leap out of bed and jot it on a post-it note so I won’t forget in the morning. Those are always my best ideas.